One of the reasons why I chose GWU as my exchange university is that its location makes it a perfect place for students to have access to rich resources. Among them, the great number of museums allow me to get immersed in the world of arts and acquire knowledge related to those artistic products. The National Museum of Women in the Arts is one of the famous museums on my wish list that I would like to visit once.

NMWA, according to the introductory information on the website, is the only major museum in the world solely dedicated to championing women through the arts. Inside the museum, there are abundant masterpieces from female artists on display. The museum itself is just like a huge palace, creating a tranquil space for the visitors to admire those works of art.

Among the art works, “Sleeping Mask, 2014” by Gillian Wearing impressed me the most. The caption beside says, “Recognizing that self-presentation－in public, on the internet, or in written communication－is a form of masking.” Indeed, including men and women, most people in the world wear a mask in front of others for fear of social norms and regulations. 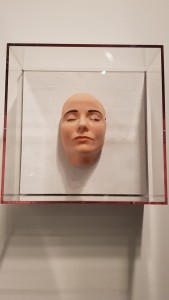 Another work that impressed me a lot is “4 Seated Figures, 2002” by Magdalena Abakanowicz. I was not able to understand what the artist wanted to convey until I read the illustration beside. “These handless figures relate to the artist’s personal experiences: she witnessed her mother being shot in the hands as soldiers stormed their home in Poland during WWⅡ.” The story behind these figures made me feel sad about how cruel wars were and how people suffered during that period.

I have also been to other museums in D.C until now, so I still have a lot to share with you. I might update them in the near future anyway. For those who are interested in women’s arts and how they fight for gender equality, NWMA must be the right place.