In the wake of the Cambridge Analytica scandal, I was asked to attend and report on both hearings where Mark Zuckerberg testified. These congressional interrogations were an electrifying event for those interested in the issue of data protection. But they became a sensation also due to the incredible fame of the witness. CEO Mark Zuckerberg, who heads one of the largest tech firms in the US, testified before Congress twice, for a total of almost 10 hours over two days. The congressional grilling was highly anticipated, for this reason I had to queue for hours on the first day of the hearing, for a total of 4 hours. I arrived at the Senate Hart Building at around 10am and lined until 2pm, when the hearing started. I was fairly close, sitting in the second row of audience, right behind Mark Zuckerberg aides. I saw Mark Zuckerberg very clearly, and the senators were also extremely visible. He entered from a door which I was sitting by. He is short and very pale. But going back to the subject: 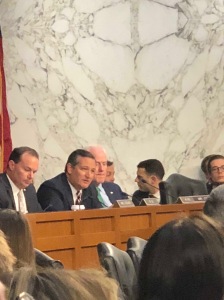 The hearing was by all intents and purposes rather unsatisfactory. No concrete progress was made, and this was largely due to the generalized lack of knowledge of the senators on the internet world. The senators looked unprepared, and Zuckerberg was showed deference, humbleness, and respect. It was a win for the CEO, who left D.C having successfully repaired the damage. At least to the large public’s eyes.

I did not attend the second hearing, I streamed it on line instead. The day after my expectations were significantly lower, so I decided not to go. However, it turned out I was wrong. The second hearing was more useful, as senators tried to not repeat the same show of ignorance that occurred the day before.

On a fun note, I appeared in the background on the live-stream of the event on The Guardian and CNN and, while in line, I was interviewed by a Japanese TV. Fun time! 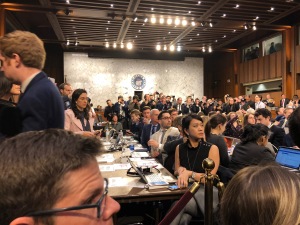