These past five days have been the highlight of my semester. Thanksgiving was the perfect pick-me-up, coming at a low point for everyone in the semester and refreshing us all for the last push of finals and the end of term. Although five days is just enough time to make us all think the Christmas holidays have come already!

For the break I was was so generously invited by my friend to spent it with her and her family in Connecticut, and I also got the chance to visit Long Island and New York City.

The first day of the holidays was a trip down memory lane as I accompanied my friend on her visit to her old high school to see old teachers and friends, something it turns out a lot of returning students seem to do when they return home after starting college. It was a surreal experience for me to be in classrooms that reminded me of middle school in New Jersey eight years ago – right down to the pledge of allegiance at the beginning of each day – but also felt a fitting and symbolic part of my ‘come back’ to America and made me think about and feel thankful for the great differences between my two US experiences.

In the evening I also got to experience ‘Friendsgiving’ – a pre-Thanksgiving meal and get-together for a group of friends all returning to their hometown for the break. A lot of fun and also a training exercise for the main event in terms of food pacing…

The next day was the day of Thanksgiving and was as perfectly ‘American’ as I could wish, the preparations in the kitchen and gathering of relatives reminding me very much of Christmas celebrations. We visited my friend’s uncle and family in Long Island and the day was filled with a feast of delicious food, American football on the television, and relaxing around the dinner table. I was immediately made to feel part of the family, joining in the annual tradition of walking the two minutes to the shore of the Long Island Sound, to choose a pebble on which to write our name and what we were thankful for and to add it to the increasing collection.

Another American ‘tradition’ of Thanksgiving I indulged in was ‘Black Friday’ (and I must confess, on my return, ‘Cyber Monday’) – though thankfully in Connecticut I did not experience the full-on craziness I had been dreading and did not have to fight anyone for my bargains. And my friend kindly let me cross off another American bucket list item by taking me to a ’50s-style diner for burgers and milkshakes. 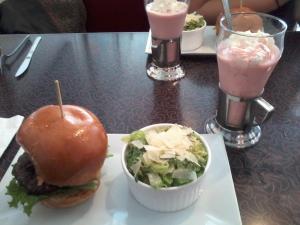 Over the weekend I also was given the opportunity to visit New York for the first time since I’ve been here. Taking in some culture at the Whitney Museum of American Art before finding lunch elsewhere in the Meatpacking District was followed by a wander around Soho, grabbing coffee in independent cafés along the way.

I also got to experience Chinatown and Little Italy and picked up tips for my return (a group of us have – foolishly? – decided to head back for New Year’s Eve…).

So good they named it twice!

The break was also a whirlwind of new culinary experiences for me – from Polish dessert babka at ‘Friendsgiving’, to Vietnamese food in Chinatown and cannoli in Little Italy as well as churros over coffee in my friend’s old high school hangout in Connecticut. However it was not only my taste buds that were educated as over the course of many conversations I was also instructed in American slang, which I look forward to springing on my unsuspecting friends over the Christmas holidays.

My break was full of lovely touches, from the little chocolate turkeys awaiting each place setting at the dessert course on Thanksgiving, to watching the movie ‘Garden State’ whilst travelling through New Jersey on the bus back from New York. I also hadn’t realised how much I’d missed home-cooked meals and it felt wonderful to be fully immersed in a family atmosphere.

The next few weeks promise lots of deadlines and stress but the break has rejuvenated me as well as given me many memories that I will treasure.

To another week of much to be thankful for and catching up with other friends’ Thanksgiving adventures,